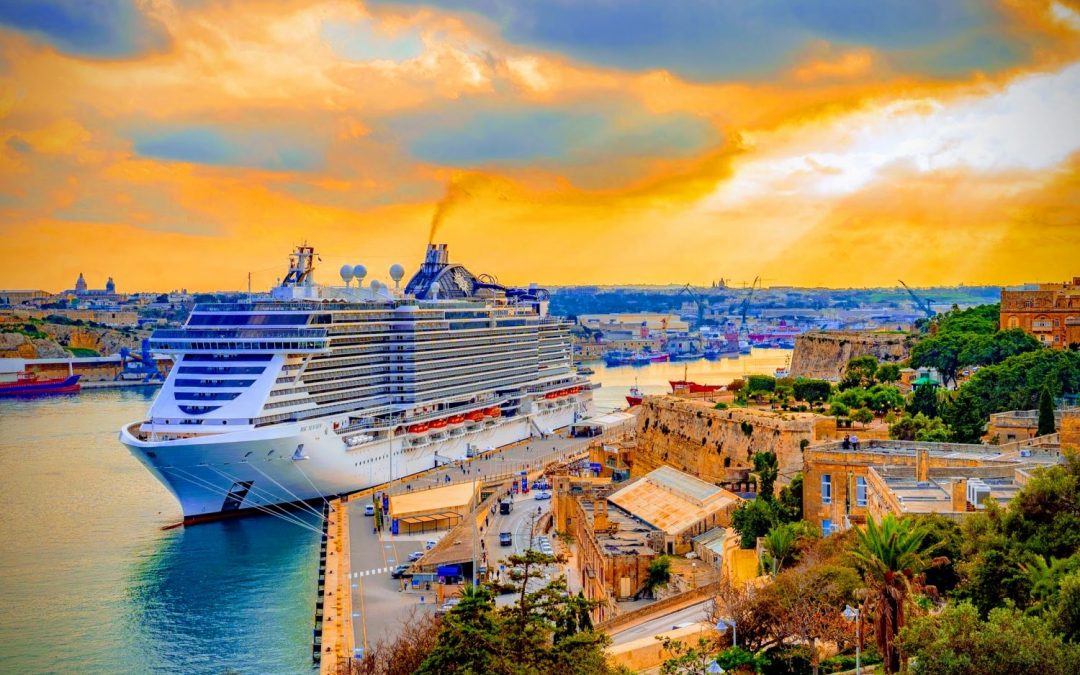 Pros and Cons of Cruising the Mediterranean

The Mediterranean is the world’s most popular tourist destination. Hosting over 350 million (2019) international tourists each year, this stellar region of warm waters, sunny beaches, idyllic islands, and picturesque coastal towns also is a favorite cruise destination for over 30 million people who visit its 22 countries, 200+ cruise-friendly islands, and 300 ports each year. In fact, seven of the world’s top tourist destinations are found here – #1 France (90 million), #2 Spain (83 million), #5 Italy (65 million), #6 Turkey (51 million), #13 Greece (31 million), #15 Portugal (25 million), and #24 Croatia (17 million). Cruise the Mediterranean and you may decide to come ashore and linger longer in such exciting cities as Barcelona, Rome, Athens, and Istanbul.

The Mediterranean includes a rich collection of islands (3,000+) for water lovers, from large and iconic Sicily, Sardinia, Cypress, Corsica, Crete, and Majorca to small and romantic Santorini, Mykonos, Nafplion, Paros, Capri, Formentera, Hvar, and Milos. The most popular cruise ports are mainland cities and towns such as Barcelona, Seville, Athens, Istanbul, Dubrovnik, Split, Lisbon, Rome, Venice, La Spezia, and Villefranche-sur-Mer (Nice) that dot the shores of the Mediterranean. Many of these places exude old world charm with their intriguing history, art, and culture. A photographer’s delight, many ports are eye candy for observers of ancient ruins, classical art and architecture, expansive plazas, colorful shops, outdoor restaurants, inviting beaches, and people watching.

Pros and Cons of Cruising the Mediterranean

Cruisers and cruise professionals generally give the Mediterranean high marks for offering the world’s best cruise experiences. Here’s what they say on both the positive and negative sides:

• Year-round sailing in relatively warm and calm waters
• Large selection of interesting cruise ports and cruise ships
• Cover several countries in a short period of time – a great travel sampling experience
• Discover new and unusual places one could never imagine – a true discovery experience
• Fun-filled and relaxing cruise options
• Convenient embarkation and disembarkation ports
• Good value compared to the cost of onshore travel (as low as $80-100 per night)
• Three positives when cruising in December and January – less expensive, few kids, no crowds
• Great embarkation and disembarkation ports (Barcelona, Rome, Athens) for extended stays
• Most ships cover numerous ports – often one per day
• Many things to see and do
• Beautiful islands and ports
• Great weather during April to October cruise season

Many people cruise the Mediterranean because of its rich collection of attractive ports – from legendary cities to charming coastal towns. Few places in the world offer such interesting places for people who love history, culture, shopping, drinking, dining, warm water beaches, and beautiful settings. Visitors to the Mediterranean quickly discover they are literally cruising “The Cradle of Civilization” – a place that is simultaneously ancient, modern, and exhilarating. At times, especially in July and August, Mediterranean ports can be very crowded with hordes of tourists. Good advice: consider visiting the Mediterranean during the less crowded but still pleasant shoulder months of May, June, and September.

There are many ways to “slice and dice” the Mediterranean into different cruise regions, delightful itineraries, and memorable experiences. Most cruise companies start by dividing the Mediterranean into two major regions (Eastern and Western) which, in turn, are further divided into sub-regions for 7- to 14-day itineraries. A minor and seldom discussed third region (Southern) has yet to gain traction in the cruise world:

The Eastern Mediterranean is especially popular for its wonderful beaches, warm weather, beautiful islands, rich culture, ancient ruins, and unique culinary traditions. The Western Mediterranean — anchored by tourist-heavy Portugal, Spain, France, and Italy — is known for its historic cities, picturesque and chic seaside towns, art, culture, shopping, and cuisine. It offers a great mix of activities and attractions for cruisers.

Within these major regions are several sub-regions around which cruise lines develop a series of 7- to 14-day cruises. These sub-regions come under many different names:

• Greek Isles: 200+ inhabited islands in Greece. The most attractive are Santorini, Corfu, Crete, Hydra, Kefalonia, Naxos, Mykonos, Skopelos, Delos, and Paros. Nafplion is considered the most romantic island. Greek Isles are also part of the Aegean Sea region.
• Aegean Sea: This beautiful cruising ground lies between eastern Greece and western Turkey; it connects to the Marmara Sea and Black Sea in the north and includes such popular islands as Crete and Rhodes; rich in history, including ancient Greece, Roman Empire, Byzantine Empire, Crusades, Ottoman Empire, and World War I (Dardanelles); most Aegean islands belong to Greece. The Greek Isles are replicated here with such popular cruise ports as Heraklion, Katakolon, Corfu, Mykonos, Patmos, Piraeus, Rhodes, and Santorini.
• Dalmatian Coast: Coastline along the eastern shore of the Adriatic Sea that includes ports in Croatia, Montenegro, and Slovenia; includes such attractive places as Dubrovnik, Split, Hvar, Zadar, Sibenik, Korcula, and Trogir in Croatia; Kotor in Montenegro; and Koper in Slovenia). Four countries in the Balkans are found here.
• Adriatic Sea: Located along the eastern shore of Italy and the Dalmatian Coast. The key port here is Venice along with all the ports along the Dalmatian Coast, such as Dubrovnik, Split, Hvar, Zadar, and Kotor.
• Turquoise Coast: Also known as the Turkish Riviera. Located in southwest Turkey, the areas includes 620 miles of shoreline along the Aegean and Mediterranean seas. A very popular area for cruise ships and traditional two- and three-masted wooden sailing vessels (gulet) that crowd the harbors and marinas of the coastal Turkish towns of Bodrum and Marmaris.
• Balkans or Balkan Peninsula: Four of 11 countries make up the Balkans on the Adriatic Sea (Dalmatian Coast): Croatia, Bosnia and Herzegovina, Montenegro, and Albania. The remaining 7 Balkan countries are either landlocked or border the Black Sea: Serbia, Kosovo, Macedonia, Moldova, Romania, and Bulgaria.
• Holy Land, Turkey, and Greece: Some cruise lines combine these three countries into a single cruise that includes the ports of Ashdod (Jerusalem) and Haifa (Tel Aviv) in Israel; Rhodes, Patmos, Piraeus, Mykonos, and Skiathos in Greece; and Istanbul, Bodrum, and Ephesus/Kusadasi in Turkey.
• Some cruise lines advertise cruises in this section of the Mediterranean as “Greek Islands and Israel,” “Italy, Croatia, & Greece,” “Italy, Croatia & Montenegro,” “Malta, the Adriatic, and Greece.”

• The Rivieras: Includes the French Riviera (also known as the Cote d’Azur) located in the southeast corner of France (extends from Saint Tropez in the west to Monaco in the East) as well as the Italian Riviera (extends from the French Riviera in the west to La Spezia in the east).
• West Coast Italy: Includes coastal cities and towns facing the Thyrrenian Sea and Strait of Sicily.
• Malta: The small island nation of Malta (122 square miles and 515,000 inhabitants) with its port city of Valletta (50 miles south of Italy) are included in this part of the Mediterranean.
• Some cruise lines advertise cruises in this section of the Mediterranean as “Spain and Morocco,” “Italy, France, & Spain,” “Barcelona to Rome,” “French Riviera and Tuscany,” “Italy and the Rivieras,” “Riviera Treasures and Rome.” 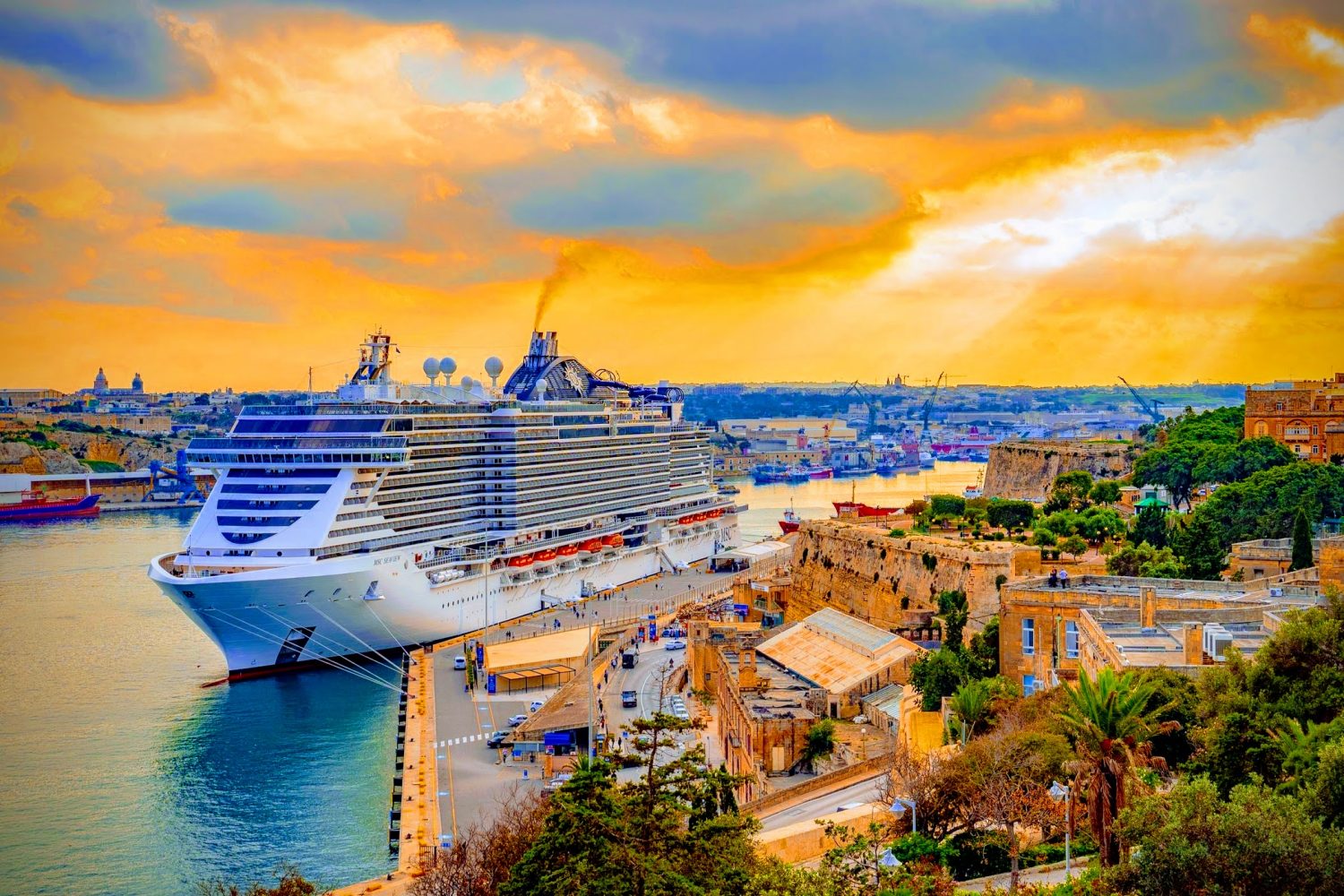 Many Mediterranean cruises are port intensive – ships visit several ports within a few days, usually one per day (most port departures occur in the afternoon or early evening and arrive in the next port in early morning). Windstar, for example, visits these 9 ports on a 9-day Eastern Mediterranean cruise: Piraeus (Athens), Monemvesia, Katakolon, Corfu, Kotor, Dubrovnik, Hvar, Zadar, and Venice.

Port accessibility can be an issue on several cruises. For example, Naples, Monaco, and Barcelona are easily accessible (can literally step off the ship and be in the port city) whereas Rome (Civitavecchia), Florence (Livorna), and Piraeus (Athens) are not (need to take a bus, taxi, or train to get to where the action is). These ports are best visited as embarkation or disembarkation ports where you may want to spend an extra two or three days exploring their many attractions without the pressure of having to return the same day to your cruise ship.

Measured in terms of annual visitors, the four busiest Mediterranean cruise ports are the following:

Many cruise specialists and seasoned travelers identify these 34 Mediterranean cruise ports as their favorites:

The most beautiful coastal and harbor towns in the Mediterranean (most are cruise ports) are found in Spain, France, Montenegro, Italy, and Croatia:

Most of these ports offer a wonderful variety of tourist options – great shopping, dining, sightseeing, history, culture, and oceanfront ambience complete with beautiful sailboats and mega-yachts. Unlike cruising in tropical waters, where white-sand and sunny beaches are everywhere, there are limited beach and water sport destinations in Mediterranean cruise ports. The best beaches are found near Palma de Mallorca, Marseille, Santorini, Villefranche-sur-Mer, Mykonos, Sardinia, Dubrovnik, Seville, Nice, and Monaco.

Since most Mediterranean cruises are port intensive, you’ll only have a few hours (8-10) to visit each port; most ships arrive in the morning and depart the same afternoon or evening for their next port. If you want more port time, select the city as an embarkation or disembarkation point so you can plan an extra 2 or 3 days to explore the place (Athens, Rome, Barcelona, Venice, Istanbul, and Haifa are good candidates). Also, carefully check the detailed itinerary of each cruise line. Cruisers often complain that their ship doesn’t stay long enough in port. This criticism is often directed toward ports with lively nightlife that begins after 8pm. Check out these Mediterranean cruise ports that have reputations for interesting nightlife:

Each Mediterranean port city seems to have its own personality along with a top 10 list of things to see and do. Some ports are best explored through an organized tour (Athens) whereas others can be experienced on your own (Mykonos). While your cruise ship will most likely offer shore excursions and recommended shore activities, you should also do your own research on what you would like to see and do. Start by searching online for the “Top 10 things to do in _______.” This key search will generate several similar lists on each port city. Many will come via recommendations of TripAdvisor users.

Be sure to check out these websites which profile cruise ports:

These sites provide an enormous amount of detail on each port as well as convenient maps for navigating various places. Also, be sure to download these useful city/port navigation apps:

If you’re not big on visiting historical sites or taking crowded ship-sponsored excursions, you might want to hire a car with guide to take you on a customized tour of places that most interest you. Check Roll Call to make onboard connections for your next cruise. Many cruisers use Roll Call to organize customized tours with fellow passengers with similar tour interests.

Several repositioning cruises also link the Mediterranean to the Caribbean and Asia.

If you need more travel information on Europe, consider subscribing to Rich Steves’ YouTube Channel which includes many of his informative travel videos and presentations for relatively independent budget travelers who prefer traveling by rail and road.

Several travel guidebooks focus on the Mediterranean. If you’re planning to do independent touring in various cruise ports, you may want to consult these four travel guides which are available through the CRUZUS bookstore:

With 30+ cruise lines specializing on Mediterranean cruises, you’ll find detailed information on hundreds of cruise itineraries by visiting their websites. The major cruises lines with a Mediterranean presence include: