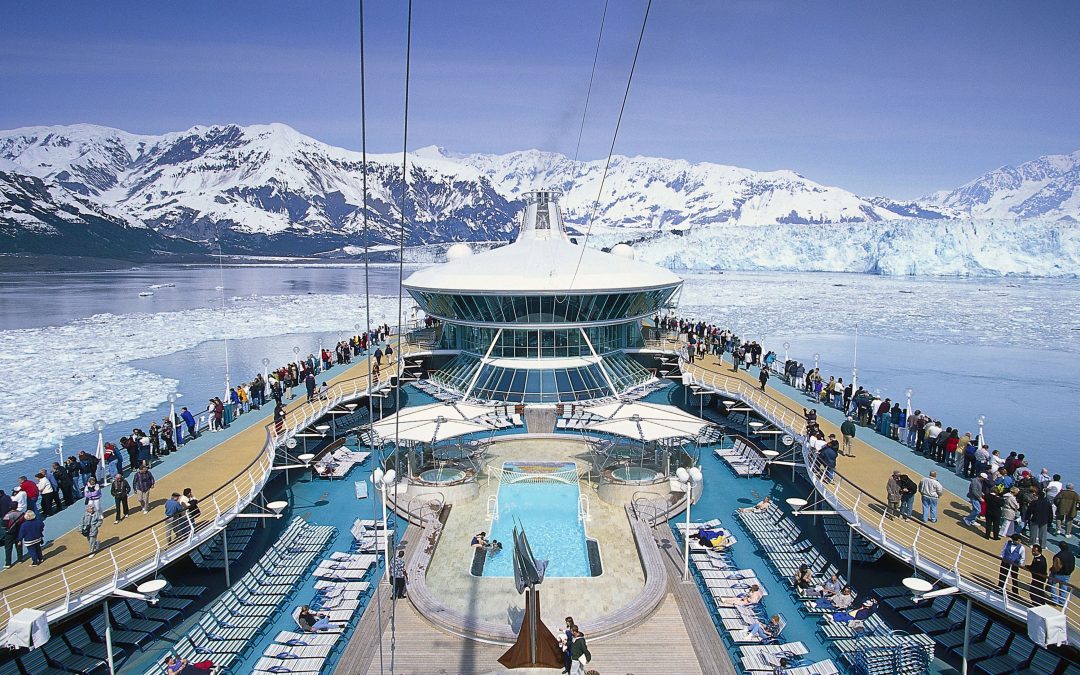 Pros and Cons of Cruising Alaska

Alaska, North America’s most popular scenic cruise destination, attracts nearly 1.5 million cruise tourists each year. It seems to be on everyone’s bucket list, either at the top or next to the Caribbean, Mediterranean, and Scandinavia/Northern Europe regions as “must do” or “best ever” cruises. Alaska also is an important gateway to more adventuresome polar cruises (North Pole, High Arctic, Northwest Passage) operated by several niche expedition cruise lines that ply the northern waters connecting Alaska to Russia, Canada, Greenland, Iceland, and Norway.

Given Alaska’s short cruise season – May to September – Alaskan waters and ports experience a tourist surge during those five months. The rest of the year, when cruise ships reposition to warmer waters in Asia, Australia, New Zealand, Tahiti, Hawaii, South America, Mexico, and the Caribbean, Alaskan ports are quiet. During the COVID-19 crisis in 2020-2021, many small ports (under 3,000 population) that used to receive over 1 million cruise passengers each year ceased most tourist operations. Their economies contracted and their recovery was in question. 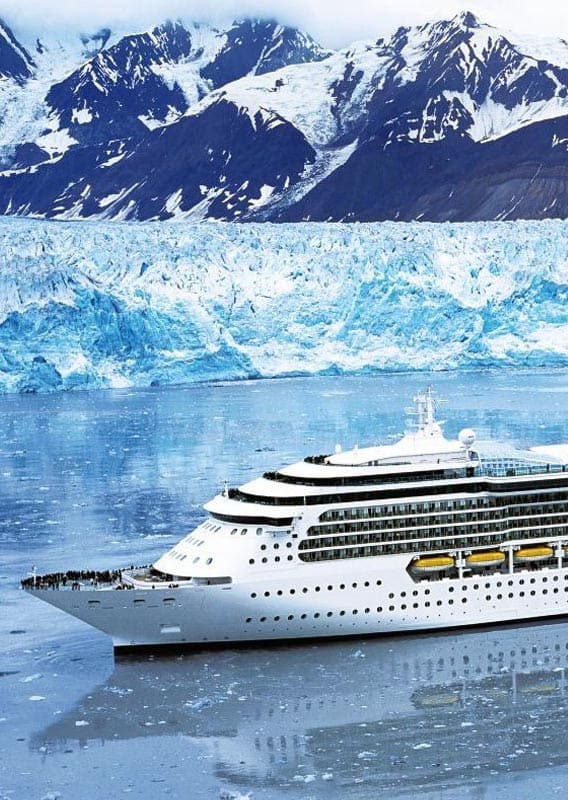 Major embarkation ports in the U.S. and Canada are:

Some of the most popular Alaskan ports of call include: 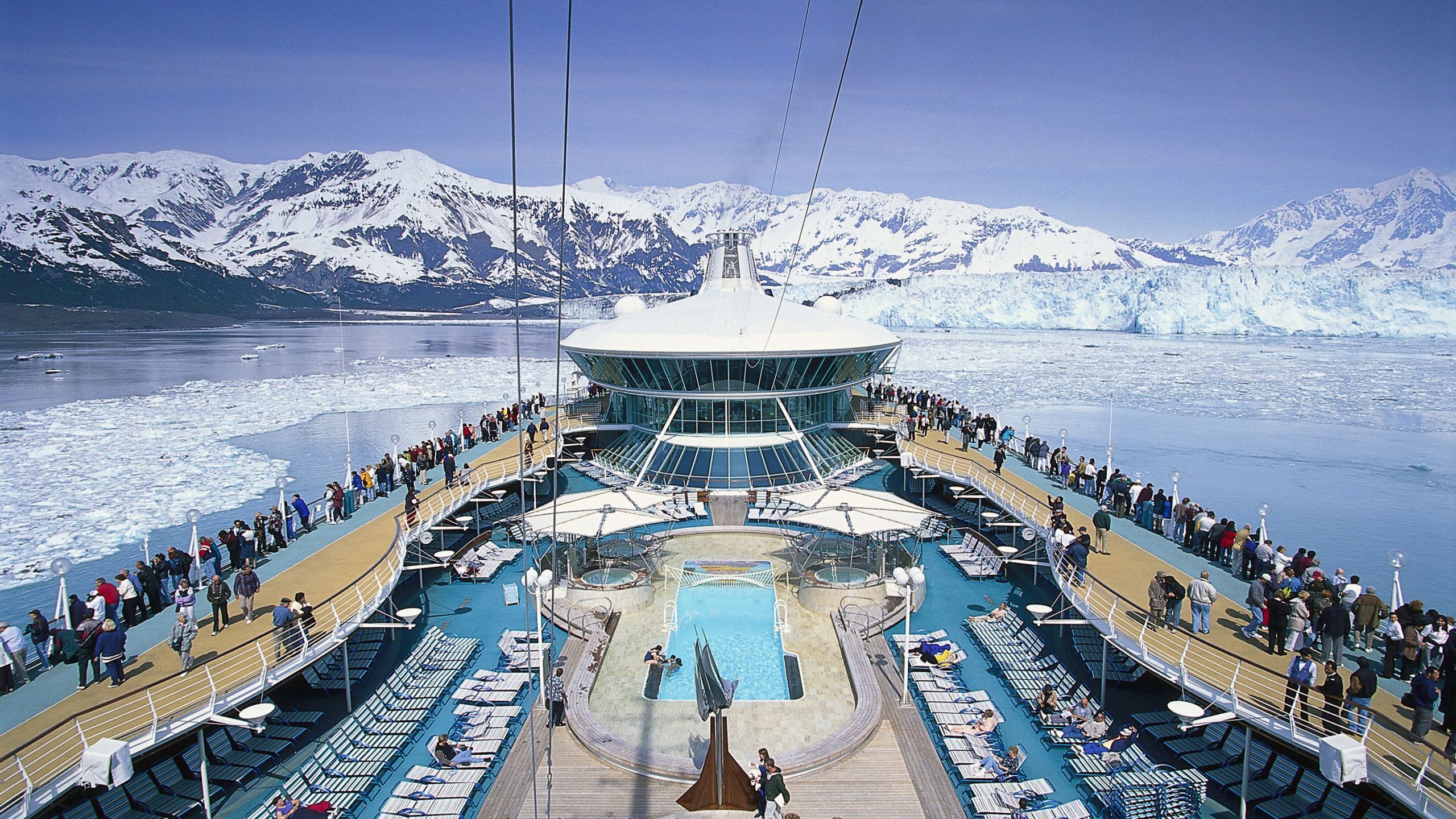 An archaic 135-year-old maritime law (Passenger Vessel Services Act – PVSA from the 1880s) requires all cruise ships sailing from the U.S. to stop in Canada or another foreign port along the way.

That means the following Canadian ports are included as embarkation ports and ports of call on the Alaskan cruise run from the lower 48 U.S. states to Alaska:

There are many different ways to cruise to, from, and through Alaska. Three cruise regions within Alaska are worth exploring – Inside Passage, Gulf of Alaska, and the Bering Straits. Several expedition cruises based in Alaska explore areas within the polar region as well as connect with similar remote areas of Canada, Russia, Greenland, and Norway that offer unique nature and wildlife experiences.

For first-time cruisers, the Inside Passage is the classic “must see/must do” cruise focused on Alaskan and Canadian scenery and wildlife. This is also known as the “Glacier Route” cruise to Alaska, a 500-mile north to south stretch of water dotted with islands, coves, islets, and fjords. Nearly two-thirds of all Alaska cruisers take this scenic route, a breathtaking area filled with history and spectacular scenery, from snow-capped mountains and ice-carved fjords to majestic glaciers, forested islands, and fascinating wildlife (whales, porpoises, sea lions, bears, foxes, bald eagles, and birds). It runs through the calm waters that connect the Gulf of Alaska in the north, starts in earnest at the southeast coast of Alaska (Glacier Bay National Park) and runs to Puget Sound in the south. One-way cruises begin in Anchorage (ports of Seward and Whittier) and end in Vancouver, British Columbia or Seattle with stops along the way in a few charming but relatively isolated Alaskan towns best reached by cruise ship or plane –Juneau, Skagway, Ketchikan, Sitka, and Haines — as well as Prince Rupert and Victoria, BC. Several 7-day roundtrip cruises go from Seattle or Vancouver to as far north as Skagway and Glacier Bay National Park and turn around for the return trip south. Small ships — several operated by the luxury cruise lines Seabourn, Regent, and Oceania — visit smaller and more intimate ports of call. Highlights of this route are towering glaciers and icebergs of Glacier Bay National Park. This is the land and environment of the famous 19th century naturalist John Muir, “The Father of the National Parks.” 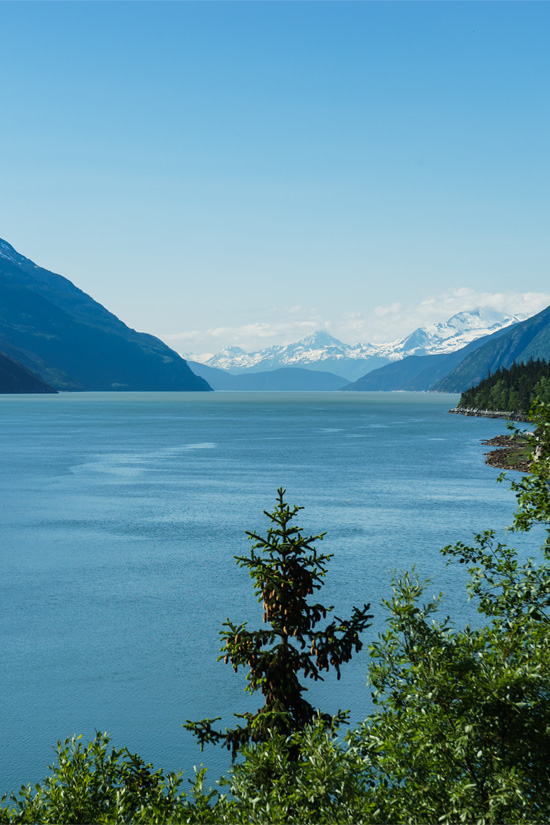 Gulf of Alaska Cruises explore the much larger coastal areas and sites of Alaska. These are longer one-way cruises between Anchorage and Vancouver or Seattle. They usually include the same Inside Passage ports of call as well as visit Valdez, Hubbard Glacier, College Fjord, Icy Strait Point, and elsewhere in the Gulf of Alaska.

Bering Straits and Beyond

Bering Straits Cruises are primarily operated by expedition cruise ships rather than mainstream cruise lines. A few cruise lines, such as Polar Cruises, venture further west into the Bering Straits and Russia as well as cruise to several “off the beaten path” polar destinations, including Nome, Alaska which is the beginning and ending port for the increasingly popular Northwest Passage cruises that originate in Norway, Iceland, Greenland, or parts of Arctic Canada. Two mainstream small ship luxury cruise lines, Ponant and Silversea, also depart from Nome, Alaska and stop at places in Russia and Western Alaska as they cruise their way south to their final destination in Vancouver. Lindblad Expeditions and Maple Leaf Adventures also visit Haida Gwaii Islands, called by some the “Galapagos of the North,” which are located 75 west of the Canadian coast. These adventure cruises may be of interest to those who want to go beyond the standard “Inside Passage” and “Gulf of Alaska” cruises.

Pros and Cons of Cruising Alaska

If you’re planning a 7-night roundtrip Inside Passage cruise (and a few 10- to 12-night cruises), your major embarkation port choices are:

Budget cruisers to Alaska disproportionately depart for Alaska with cruise lines that use Seattle rather than Vancouver as their home port. Except for Oceania, which departs from Seattle, most luxury cruises operate from Vancouver. Most of these cruises include Skagway, Ketchikan, Sitka, and Juneau as ports of calls on their Inside Passage cruises. Skagway is a turnaround port – the port where most round trip cruises literally turnaround and head back to Vancouver or Seattle. 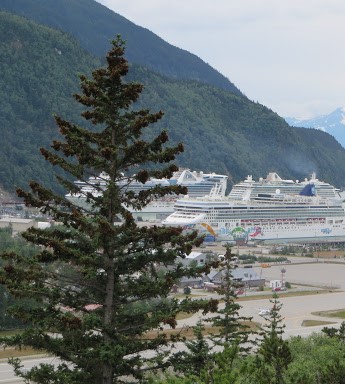 If you plan to leave from Seattle, you have two port choices – Bell Street Pier at Pier 66 and Smith Cove at Pier 91 – which are 15 to 30 minutes from the Seattle-Tacoma International Airport (all cruise lines offer shuttle services. Bell Street Pier is the better choice for accessibility to city attractions since it is located downtown within walking distance of Pike Place Market, Seattle Aquarium, the Great Wheel, and several hotels and restaurants. Two cruise lines depart from Bell Street Pier: Norwegian Cruise Line and Oceania Cruises. Smith Cove is about a 10-minute drive from downtown Seattle and has no nearby attractions. Cruise lines using Smith Cove as their home port include Carnival Cruise Line, Celebrity Cruises, Holland America Line, Princess Cruises, and Royal Caribbean.

Individuals planning to take luxury cruises, longer cruises, and one-way cruises to Alaska should consider leaving from Vancouver rather than Seattle. If you’re departing from Vancouver, you will leave from Canada Place cruise terminal, which is conveniently located in downtown Vancouver and a 30-minute drive from Vancouver International Airport. Cruise lines using this port include Disney, Holland America, Celebrity, Princess, Norwegian, and Royal Caribbean as well as the luxury lines Crystal, Seabourn, Silversea, Regent Seven Seas, Viking, and Windstar. These cruise lines offer many 7-night round trip cruises to Alaska along with 8- to 14-night cruises and one-way cruises to Anchorage from where they can transition to more lengthy ground tours and return home by air.

American Cruise Lines offers a unique 14-day Inside Passage cruise from Juneau to Seattle and visa-versa with stops in lesser visited Alaskan ports such as Haines, Petersburg, and Wrangell. It also offers 8- and 11-day roundtrip cruises of the Inside Passage from Juneau.

Alaskan cruises also depart from Anchorage through the nearby ports of Seward and Whittier. These ports are excellent choices for travelers who want to spend some time touring Alaska, such as the Denali National Park and Preserve (Mount McKinley), prior to embarking on a cruise through the Gulf of Alaska and the Inside Passage and then south to ports in Vancouver or Seattle. Several cruise lines offering cruise tours (usually add five days of ground touring) start from Fairbanks and then go to Denali National Park before departing by cruise ship from Anchorage (port Seward).

Cruise lines departing between May and September from Anchorage for Vancouver include:

The most frequent ports of call for Alaskan cruises include:

Other ports of call, with isolated bays and small towns, that smaller cruise ships often visit include:

They also visit the following parks and glaciers:

Alaska is a great place to enjoy outdoor scenery – mountains, fjords, glaciers, bays, and forested islands – as well as view a rich collection of wildlife – whales, eagles, bears, and birds. It’s a sightseer’s and photographer’s paradise.

There’s seldom a dull moment wherever your visit in Alaska, especially in the coastal and island cruise areas. Alaska will simply take your breath away in more ways than one.

Since the big embarkation ports are Seattle, Vancouver, and Anchorage, you should consider spending two or three extra days in these port cities, or do a 5-day extended venture into Denali National Park prior to departing or immediately after completing your cruise. Cruise lines such as Norwegian Cruise Line and Princess Cruises offer extended stay packages or what they call “cruisetours” that combine their cruises with train travel and lodging in national parks. These long-established Alaskan cruisetour operators own and operate ground transportation, lodging, and excursions that make these combined sea and land operations relatively seamless and very convenient.

Princess is the biggest cruisetour operator. It offers 30 different packages and several rail-and-hotel-only itineraries. Other cruise lines offering combination cruise and land tours include Holland America, Celebrity, and Royal Caribbean. The inland city of Fairbanks is the departure point for cruisetours offered by Holland America, Princess, Royal Caribbean, and Celebrity. From there clients travel south by bus to Denali National Park. After staying two or three days in the park, they travel south by bus or train (Princess has their own luxury domed Princess Alaska Rail Service) to Anchorage and then board their cruise ship in the nearby port of Seward.

Several mainstream cruise lines specialize in cruises to Alaska. As just noted, two cruise lines, which have been doing Alaskan cruises for more than 50 years, have an extensive land-based infrastructure, including lodges in Denali National Park – Princess Cruises and Holland America. These two cruise lines also receive preferential access to Glacier Bay National Park, an area that is restricted to only two cruise ships per day. If you are on one of their ships, you’re nearly guaranteed to sail into the Glacier Bay area. If you are with some other cruise line, you may not be able to enter this fabulous area. Be sure to check with cruise lines before you book an Alaskan cruise to make sure you’ll be able to see and experience Glacier Bay, a major highlight of any Alaskan cruise.

The following mainstream cruise lines offer a variety of Alaskan cruises and tours:

Variously called expedition, exploration, or adventure cruises, the following companies offer cruises in and around Alaska and the polar region:

Two luxury mainstream cruise lines — Ponant and Silversea — also operate expedition cruises in Alaska. The largest and most experienced cruise players in the expedition arena in Alaska and elsewhere are Lindblad Expeditions and Hurtigruten. Many of the expedition cruise websites include video libraries, as well as support YouTube channels, featuring their unique cruises. Lindblad Expeditions has one of the most extensive libraries of short high-energy video clips.

You’ll find many useful resources on cruising in Alaska and related expedition cruises that use Alaska as a gateway to the Arctic region. Many of these Alaskan YouTube videos are created by travel experts, amateur cruisers, and major cruise companies. Some of the best include:

A few travel guidebooks focus on cruising in Alaska. If you’re planning to do independent touring in various cruise ports, you may want to consult the first three travel guides which are available through the CRUZUS bookstore; the other books are wonderful idea and armchair traveling books: