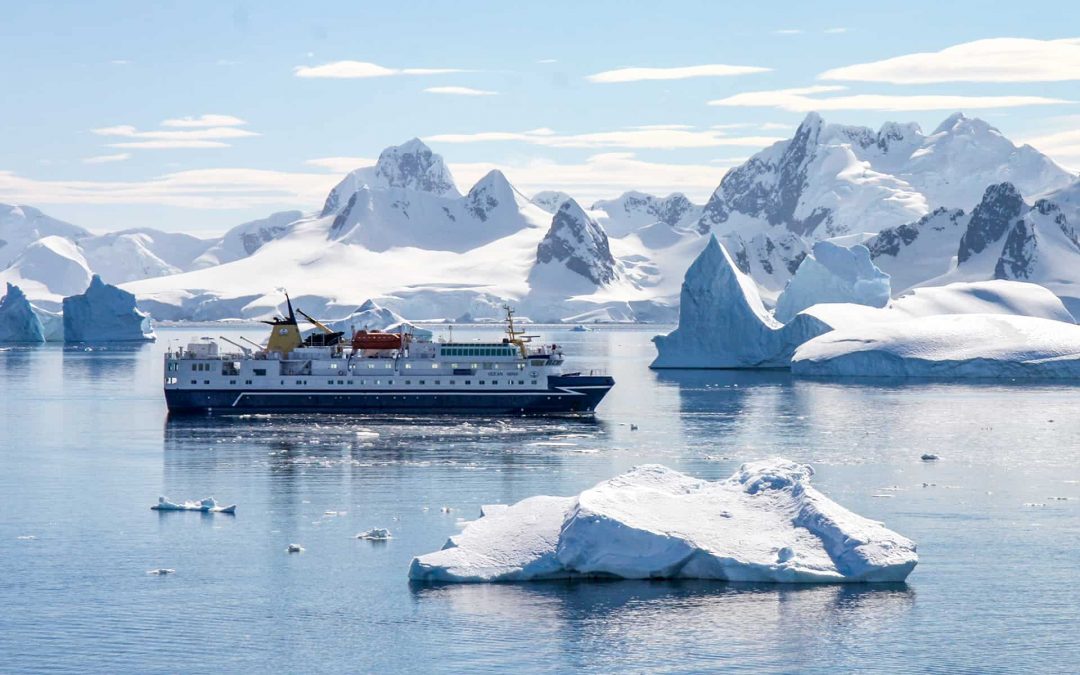 Pros and Cons of Cruising the Antarctica

The Antarctica has become a popular bucket list destination for many people in search of unique water, ice, wildlife, and outdoor experiences in a beautiful blue and white, but cold and desolate, polar setting. Indeed, many travelers claim an Antarctica cruise was their “best ever” travel experience. This is an intriguing area of killer whales (orcas), cute penguins, beached seals, soaring albatross, turbulent seas, awesome icebergs, and a strange dead-cold desert.

Since rugged sea- and ice-worthy vessels are the primary way to reach this southern-most continent, everyone visiting Antarctica more or less becomes an expedition cruiser. Some arrive in private jets or high-tech luxury yachts equipped with submarines and helicopters (Crystal and Scenic). Others tour in small and aging exploration icebreakers with basic cabins fitted with bunkbeds and offering few creature comforts. And still others arrive in small and mid-sized expedition ships (100 to 500 passengers) that offer many comforts between these two extremes. Several small luxury cruise lines, such as Seabourn, Silversea, Ponant, Crystal, Viking, and Scenic, visit the Antarctica with ice-class vessels. A few large mainstream cruise lines (Princess, Holland America, Celebrity, and Norwegian), with ships carrying from 2,000 to 3,800 passengers and crew members, include sightseeing cruises to the Antarctica; their passengers do not set foot on land. And several expedition companies, such as Hurtigruten, Lindblad Expeditions, Quark Expeditions, and Aurora Expeditions – the true polar expedition cruise pioneers offering both water and onshore adventures — have long been in this cold and windy business. And some well-heeled visitors skip the often turbulent 2-day cruise experience through the Drake Passage and quickly fly over the Passage in private jets that land on special landing strips on King George Island and at the South Pole.

The Antarctic is truly an exhilarating (amazing and weird) experience for travelers who now have many pricey sea, air, and land options to experience the wonders of this place from multiple embarkation points – Argentina, Uruguay, Chile, New Zealand, Australia, and South Africa – that tackle different areas of the continent (Antarctic Peninsula, Weddell Sea, Ross Ice Shelf, and South Pole). The Antarctic Peninsula includes many research stations as well as such beautiful places as Paradise Bay and Dorian Bay. The most visited islands are the South Shetland Islands (includes King George, Elephant, and Deception).

Antarctica is unlike any other place you’ll ever visit – the world’s underbelly known for its water, ice, majestic scenery, winds, and wildlife of marine mammals (whales, seals, and penguins) as well as a triumphant and tragic history of polar exploration during the Heroic Age of Antarctic Exploration (1897–1922) when such explorers as Amundsen, Scott, Borchgrevink, Mawson, and Shackleton became world celebrities (see “Recommended Resources” section at the end of this article). It’s also a polar desert that receives less than .8” of precipitation a year. If you’re looking for polar bears, reindeer, fox, and wolves, you’re at the wrong pole – that’s the signature wildlife of the North Pole and Arctic Circle. Bring your cameras and put on your ship-issued foul weather gear – this is going to be an unusual experience you’ll want to document as evidence supporting your once-in-a-lifetime Antarctic adventure stories.

It’s an adventure, it’s exhilarating, and it’s not cheap. Indeed, get ready to spend $1,000 to $3,000 a day to cruise this fascinating world of water, ice, aquatic wildlife, scientific outposts, traces of exploration madness, new climate challenges, luxury yachts, and annual marathon footrace. But that’s just for starters. For a lot more money ($10,000 per day) you can fly into the South Pole from Cape Town, South Africa on a Gulfstream jet and camp and trek there for a few days (White Desert) – the ultimate luxury adventure in Antarctica. Or, if you’re part of the adventuresome super-rich class, you can skip cruising altogether and fly your private jet onto the only runway designed for private jets in Antarctica! Perhaps this is another place where billionaires go to escape from millionaires – the ultra-rich who may also occasionally escape to exclusive private Caribbean islands, such as Petit St. Vincent, Canouan, Neckter, Moskito, and Mustique.

Whether you embark from the tip of South America or New Zealand, fly in from Chile or South Africa, survive the challenges of the turbulent Drake Passage, or learn to walk and trek on ice without the convenience of restroom facilities, the Antarctic is simply an adventure of a lifetime – a trip that makes bucket list-travel both exciting and worthwhile.

The Antarctica is different. It’s a “Travel-Plus” destination – filled with the unexpected and unpredictable, starting with the weather, which can go through four seasons in a single day! So be prepared to encounter some of the following realities when you visit the world’s driest, highest, coldest, windiest, most barren, inhospitable, darkest (winter), brightest (summer), timeless, directionless, and weirdest place on Earth:

Pros and Cons of Visiting the Antarctica 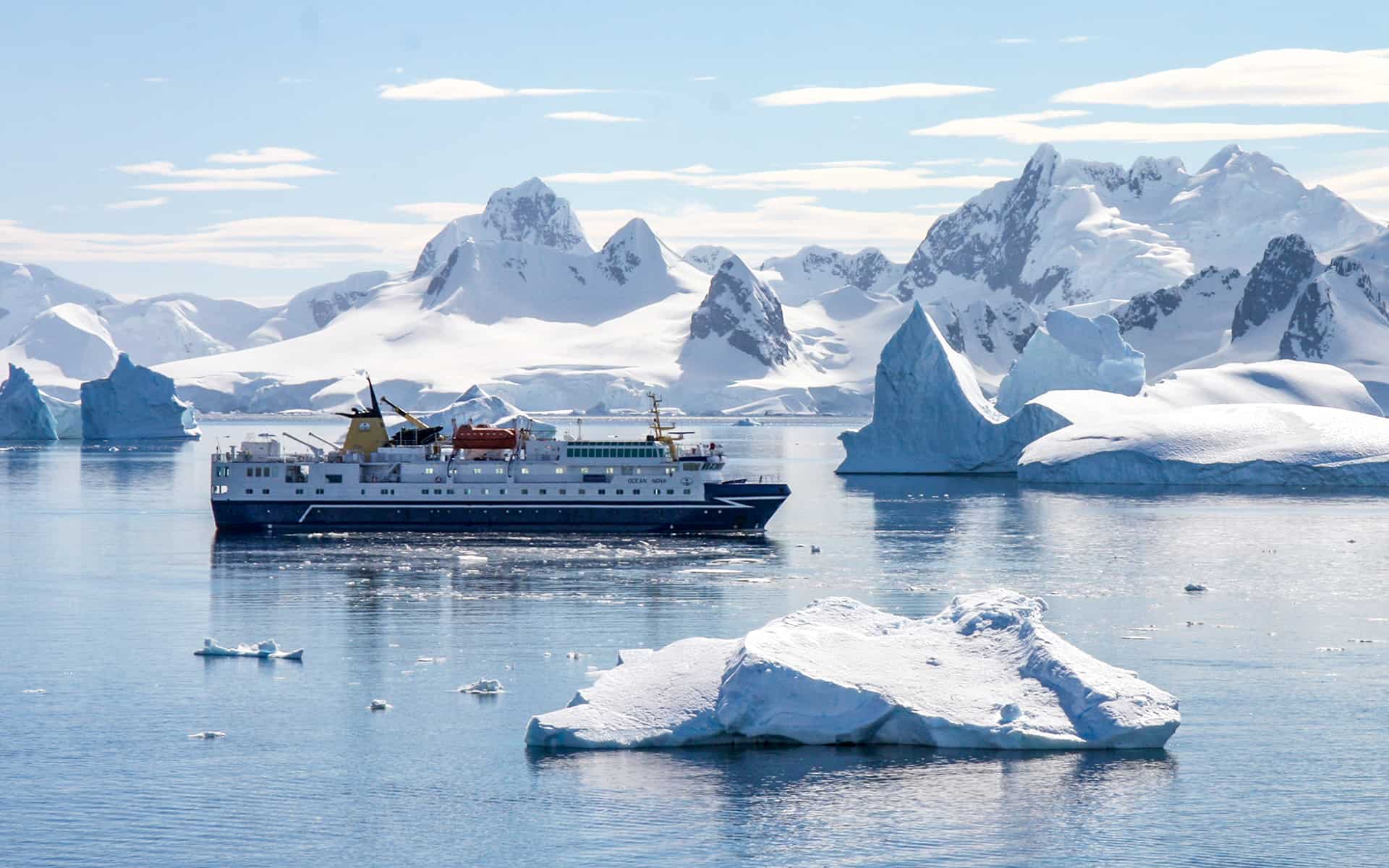 Most expedition cruise ships specializing on the Antarctic depart from the tip of South America (Ushuaia). While some cruise lines make Santiago (Chile) and Buenos Aires (Argentina) their official departure points, in most cases these cities are only pre-cruise meeting destinations for flights elsewhere; clients initially gather at hotels, enjoy the cities, and then fly together for three hours to key embarkation ports where they board and familiarize themselves with their ship. A few large ships (2,000 to 3,800 passengers) actually depart from Santiago and Buenos Aires and make brief sightseeing passes near Antarctic, but the bulk of their cruise focuses on Patagonia — Chile’s Andes Mountains, fjords, lakes, and glaciers and Argentina’s deserts, tablelands, and steppes.

The major departure port (90%) for Antarctic expedition cruises is Ushuaia (Argentina). Other departure ports include Punta Arenas (Chile), which is also used for air-cruise trips of Antarctica21 (fly from Punta Arenas to South Shetland Islands where its three ships dock at King George Island) and Stanley (Falkland Islands). Some cruise lines (Silversea and Aurora Expeditions) now use Punta Williams (Chile) as a departure port.
A limited number of expedition cruises (Ponant, Oceanwide Expeditions, Heritage Expeditions, National Geographic Endurance) also originate in New Zealand and Australia. The embarkation ports include Invercargill/Port of Bluff, Dunedin, and Lyttelton-Christchurch in New Zealand and Hobart in Australia. Compared to the more popular South America-based Antarctic cruises, the Australia- and New Zealand-based cruises are much longer, more expensive, and less awe-inspiring. They go to the historic Ross Ice Shelf (where famous British polar explorer Robert Falcon Scott and his party tragically died in 1912). This is also the area of early Antarctic explorations. Here you can visit the huts of Scott, Shackleton, and Mawson. This is also one of the most remote areas of Antarctica with tall icebergs, extreme weather conditions, and turbulent seas. Some companies, such as Hapag-Lloyd, combine both areas in a single expedition cruise – embark in Ushuaia, Argentina and disembark in Lyttelton-Christchurch, New Zealand.

The size of your cruise ship is very important to enjoying an Antarctic cruise adventure. Large ships (more than 500 passengers) are prohibited from landing in the Antarctic. If you’re on such a ship, you’ll only pass by land masses for wildlife watching and photo opportunities – no onshore experiences. For ships under 500 passengers, only 100 passengers are allowed to go onshore at a time. Therefore, passengers with smaller ships (under 100 passengers) are able to spend more time onshore as well as travel together in zodiacs from ship to shore. Ships between 101 and 500 passengers will need to limit the onshore time of multiple groups that go onshore. More of their time will be spent on the logistics of moving passengers back and forth to the ship. Time spend on shore may be only one hour unless you opt for overnight camping or join the annual footrace sponsored by RacingthePlanet (participants spend 12 hours onshore).

Depending on the ship you choose, Antarctica cruises offer a wide variety of onboard, on water, and onshore things to see and do. If, for example, you join a research vessel as a paying passenger, you may have an opportunity to participate in an ongoing research project related to wildlife and ecology. These can be Spartan ships On large luxury cruise ships that are prohibited from taking passengers ashore, most of your activities will be onboard — range from participating in enrichment (lecture/presentation) programs, shopping, gambling, and dancing to specialty dining, exercising, spa treatments, and entertainment. Since these are primarily scenic cruises, passengers have many opportunities to take photos of the Antarctic world around them, which means viewing amazing wildlife and beautiful ice formations and landscapes.

Most pre- and post-trip extensions offered by cruise companies focus on spending two to four extra days in the four major gateway cities for Antarctic cruises – Buenos Aires, Santiago, Ushuaia, and Punta Arenas. If you’ve never been to Buenos Aires or Santiago, you’re well advised to take some extra time to visit these two delightful cities and perhaps use them as bases for visiting other interesting areas of South America, such as Peru and Brazil.

If you take an Antarctic cruise from New Zealand or Australia, you’ll have many pre- and post-trip extension options in these two countries. In New Zealand, you’ll already be on the South Island which offers many interesting travel opportunities to wine country and interesting arts and crafts centers. In Australia, exploring Sydney and Melbourne should be “must visit” trip extensions. An extra four or five days in each of these countries will be well worth the trip.

Each year over 50 research, expedition, and luxury cruise ships offer a variety of Antarctic cruise and land experiences. Be sure to check out the detailed itineraries of each cruise line. While many small expedition cruise lines offer passengers hands-on water experiences (submarining, kayaking, scuba diving, and swimming), go ashore (zodiacs and trekking), and even camp on the ice, other companies (mainly large cruise lines) only do scenic cruises (the “drive-by” specialists) to sightsee and take photos rather than engaged in active water and onshore adventures. And some mainstream luxury cruise lines (Silversea, Crystal, Hapag-Lloyd, and Viking) now have small expedition-class ships to compete in this cruise space. One operator – Zegrahm Expeditions – decided after 30+ years in this business to fold up operations in 2022 because of the crowded field of competitors.

Here are some of the major Antarctic operators with sample itineraries (most are similar with Ushuaia being the key port):

The following resources will give you a good orientation into various aspects of the Antarctic, from the tragic and triumphant history of exploration to today’s best cruise experiences.

Videos of Antarctica and Cruise/Travel Experiences

You’ll find numerous videos about Antarctica online. Most cruise lines post videos of their expeditions on their websites as well as on YouTube. Lindblad includes numerous short videos on a variety of cruise subjects. Hurtigruten offers some of the most informative videos. A few travel experts, such as Gary Bembridge, also post informative videos about Antarctic cruises and cruise ships. For starters, sample some of the following videos to acquaint yourself with what’s going on in the Antarctic cruise and travel worlds: